My father left the Royal Air Force after the War, to help his father run the family nursery, which he eventually took over. As a kid I worked on Saturday mornings in the shop where we sold all the produce, to earn a bit of pocket money. Grandpa sat in the corner and appeared to be dozing. In fact he was watching me like a hawk. The tomatoes were weighed to order and the adding up was done in your head – quite a challenge for an 11 year old. “You put one too many in that last pound of tomatoes. If you do that every time, you’ll put us out of business,” Grandpa would say.

Dad’s mother Jessie was from Falkirk just outside Edinburgh and an excellent cook. Grandpa met her when he was in charge of the gardens at Battle Abbey in Sussex and she was running the dairy. I often wonder how a young Scottish lass ended up working nearly 500 miles away from home, but by the time I wanted to ask she had been dead for many years.

My mother grew up in Malta where her father was stationed during the War with the Royal Engineers. Strict rationing meant she was never allowed to cook, in case she ruined precious ingredients. Before they married Dad asked his future bride if she could cook. When she said no he thought she was being modest. She couldn’t boil an egg.

From working in the dairy of Battle Abbey my maternal grandmother had learned many skills, including how to make butter into swans for afternoon tea. In the early years of marriage, my mother grew sick of hearing my father waxing lyrical about his mother’s swans. “If you want me to make the butter into swans you’d better go back,” she would say, teasingly. Fortunately, Nana took Mum under her wing and taught her a few basic recipes, so we wouldn’t starve. Not the swans, but more practical things.

Once a year Dad would bring in a couple of boxes of  ripe tomatoes from the nursery and the whole family helped turn them into tomato chutney, using Jessie’s mother’s recipe. 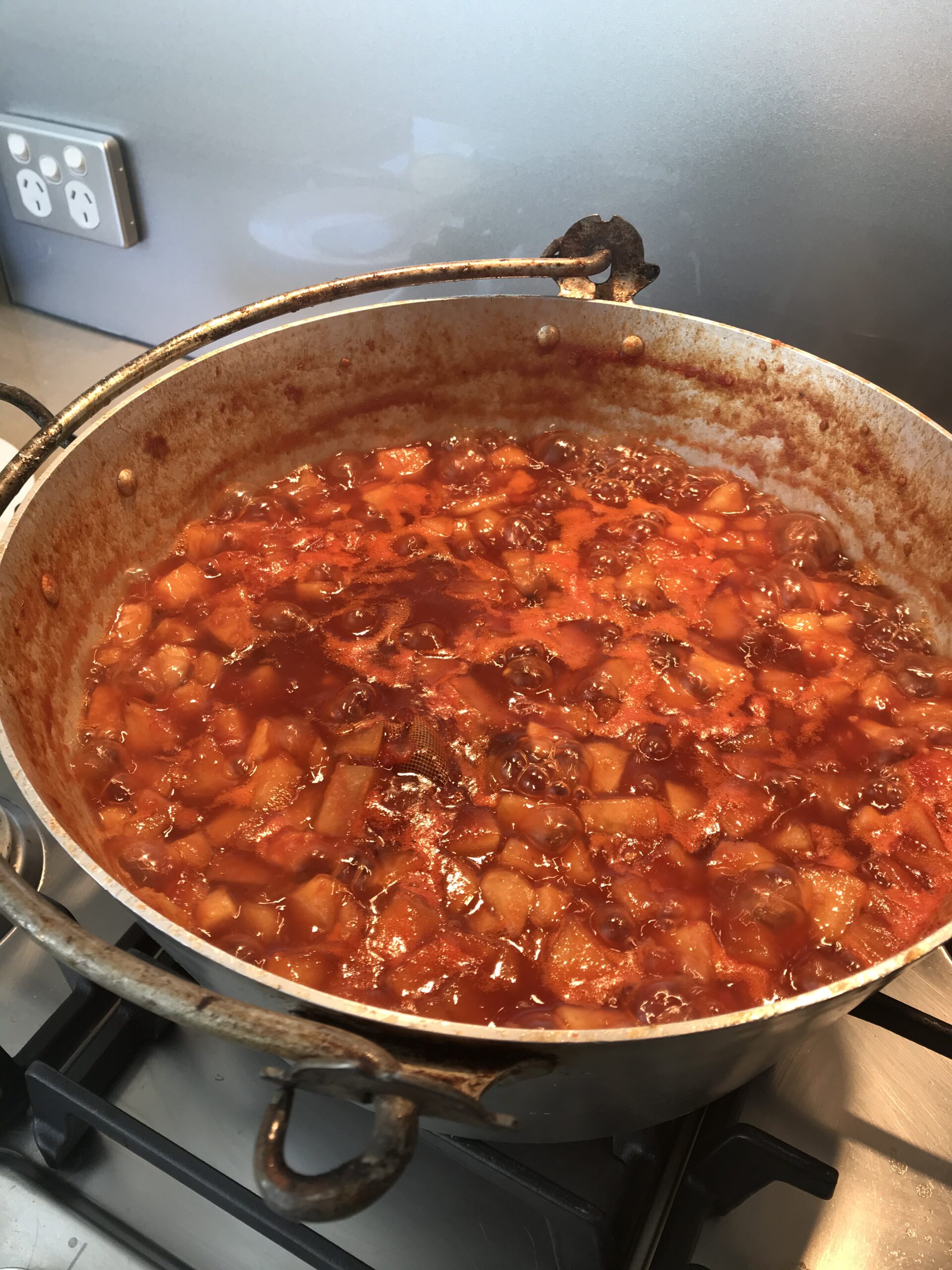 Matthew and I met in Geneva when he was working for the Australian Mission to the UN and I was working for the British FCO. He had recently broken up with a long time girlfriend and I was also footloose and fancy free when a mutual friend invited us to a tramps and tarts party. The rest, as they say, is history.

Not long afterwards we rented a ski chalet in La Clusaz for a week with a group of friends. It was self-catering so everyone brought some food. Unpacking my box of contributions, Matthew came across a jar of tomato chutney. Despite living in a tiny bed-sit with only two hotplates I still made a few jars each year as it’s considered a staple in my family. “What’s this?” he asked, so I told him. Before you could say Jack Robinson he had unscrewed the lid, eaten a spoonful and hidden the jar in one of the top cupboards. “Too good for that lot,” he said “they’ll polish it off in one go.”

Matthew and I met in October and married the following May. He always says he married me for my tomato chutney. Needless to say, running out is grounds for divorce in our house.

Over the years I’ve only made two slight adjustments to this very old recipe. I use cider vinegar instead of dark malt vinegar and have cut down a bit on the sugar and salt. It’s crucial to use vine-ripened, very red, tasty tomatoes. The hard, orange, tasteless ones you buy in supermarkets in winter will produce a very mediocre chutney. I make several batches in late summer to last a whole year.

The Pickling Spices recipe makes enough for several batches. I usually make up four times the recipe – you can see the quantities in brackets – which means I have enough to last for a couple of years or more. I use it in other chutneys. Don’t do as one of my followers did and use the whole pickling spice recipe in one batch of chutney! You will need a large preserving pan with a heavy base for this recipe. Mine is stainless steel and has a diameter of 33cm and a height of 15cm. It holds about 7 litres. Alternatively make half the recipe in a large heavy-based saucepan.

Pour boiling water over tomatoes and leave for a couple of minutes, then remove skins and chop. Core and chop the apples and chop the onions. Place pickling spices in a muslin bag or tie them in an old cotton handkerchief. Place all ingredients except mustard seeds in preserving pan.

Cook for about an hour at a steady boil, until thick. Stir regularly to prevent sticking, especially towards the end. Meanwhile place sufficient clean jars (without their lids) in the oven set to 120°C. Or you can zap them in the microwave on High for 2 minutes. How many jars you use will depend on the size of the jars.

When chutney is cooked remove pickling spices, squeezing the bag so any juices go back into the chutney, then discard the spices. Stir in mustard seeds and pour into the hot sterilized jars using a small jug. Poke a knife down right to the bottom of each jar, all the way around the edge, to remove any air bubbles. Seal jars with the lids and store in a dark cupboard. Keeps for at least 12 months.

Mix and keep in a jar. If the cinnamon sticks are very hard you may need to hit them with a meat mallet to break them up. I usually make 4 times the recipe at a time, for which quantities are in brackets. Pimento (also known as Allspice) look like very large black peppercorns.

14 thoughts on “The Tomato Chutney Dowry”