This delicious one pot recipe comes from one of my favourite no-nonsense cooks, Nigella Lawson. As the chicken, leeks and carrots cook they create a delicious stock which soaks into the pasta. Nigella uses a very small pasta called Orzo or Risoni, which looks a bit like grains of rice. I only had a small amount of Risoni at the bottom of a packet, so I made up the difference with another small pasta.

The recipe will serve at least six. We had it on its own, but you could always add a crusty loaf and a green salad to feed more people. Choose a large heavy pot with a lid which will hold the chicken, with room around it for the vegetables and pasta. Mine is an oval Le Creuset casserole (from the 1970s, when orange was a very popular colour!) which can be used on the stove top as well as in the oven. Nigella uses dried tarragon, but as I have fresh in the garden at the moment I used that. 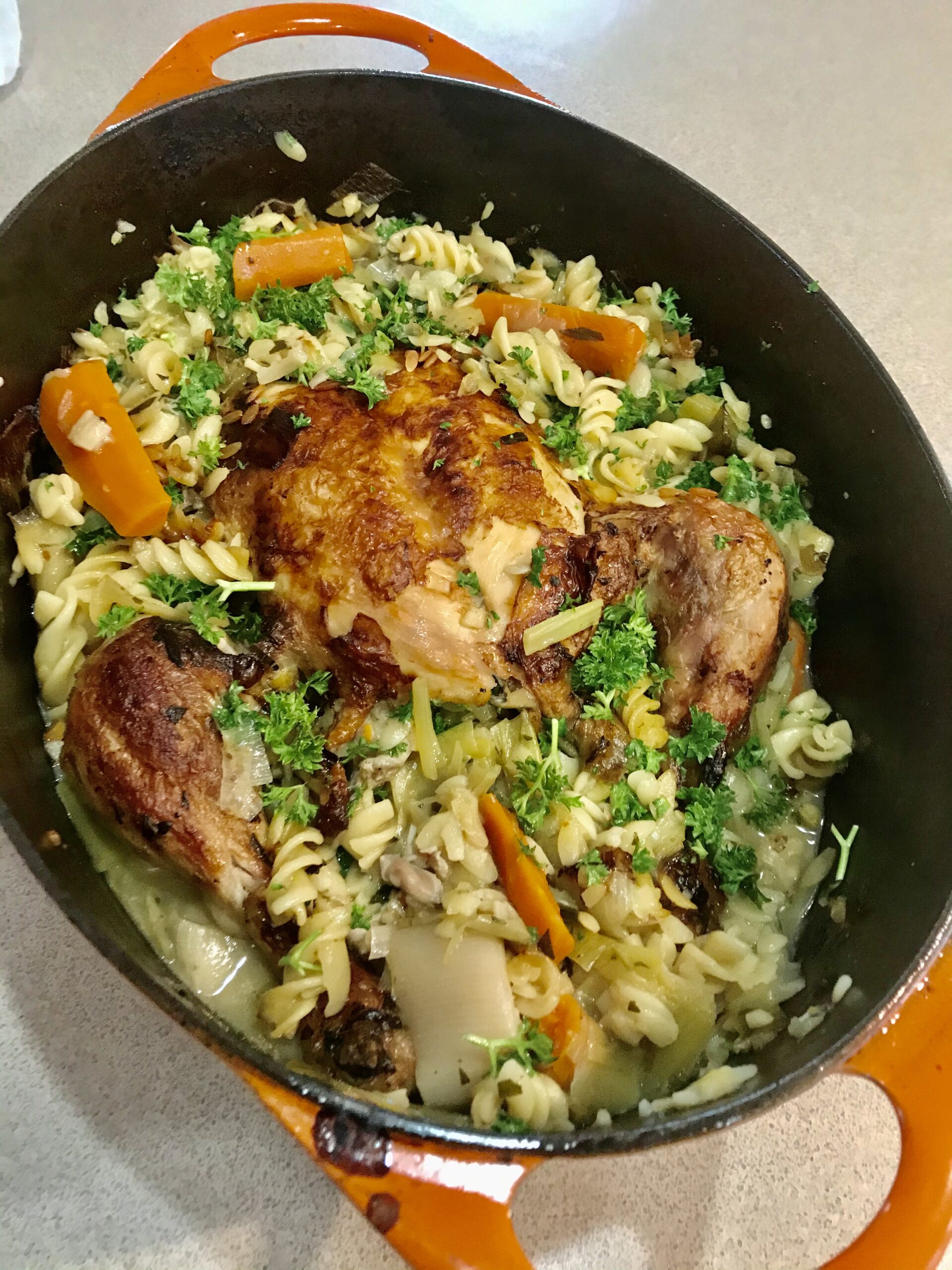 Preheat oven to 180°C and prepare the vegetables. Heat the oil in a large heavy-based casserole with a lid. Dry chicken with paper towels and place in the pan, breast side down, for 3-5 minutes, or until nicely browned. Turn the chicken over and then add the garlic, lemon rind and juice, tarragon, salt and chilli flakes, if using, filling the space around the chicken. Add enough water to cover the vegetables, but not the browned chicken breast which should be left sticking out of the liquid. Turn up the heat to bring the liquid to the boil, then cover the casserole and place in the oven for an hour to an hour and a quarter, by which time the chicken will be cooked. Add the pasta, pushing it under the liquid and stirring it as best you can.

Cover and return to the oven for 15 minutes or until the pasta is cooked. Remove from the oven and leave to stand for 15 minutes before serving. Mix in some of the parsley and scatter the rest on top. Serve a bowl of grated Parmesan on the side.

Note: if you don’t have a casserole dish which can be used on the stove top, brown the chicken breast in a frying pan, then put it into the casserole with the remaining ingredients and add boiling water instead of cold.