I inherited my love of cooking from my Dad’s mum, a Scottish lady called Jessie who had worked as a cook in a stately home before she married. Cooking was never my mother’s favourite pastime – she preferred gardening – so when I started to take an interest she gave me lots of encouragement.

And so did Dad. He loved to walk into a house with the smell of baking wafting through. “What are you making lass?” he would enquire. And when I told him he would give me his signature combined wink/nod/smile and head off with a spring in his step.

Dad loved fruit cake so Mum did her best to make sure there was usually one on the go. When she was newly-married and unable to boil an egg, her mother-in-law taught her to make a few basics, to keep body and soul together, otherwise we might have starved. Nana taught Mum to make a “ten, ten, twenty” cake mixture, which she made for the rest of her life. Well, until Dad died and there was nobody left to bake for. The recipe used 10 ounces of butter, 10 ounces of sugar and 20 ounces of self-raising flour, plus a couple of eggs and some milk. Mum learnt to add dried fruit and spices to half the mixture and make a fruit cake she called “Cut and Come Again”. Half of the remaining mixture became an Eve’s Pudding – stewed apples topped with cake mixture, baked and served with custard. With the last quarter Mum made a dozen cup cakes (which we called buns) or a slab cake, which she iced and decorated with glacé cherries. Sometimes she made a cake from stale bread, which I learnt later was a typical Maltese Bread Pudding.

Mum wasn’t a bad cook – what she made was always tasty – but she didn’t enjoy cooking and her repertoire was fairly limited. However, when I look back, I realise that we ate pretty well, compared with the rest of the British middle-class population at that time. When my friends were invited to stay for dinner, (or tea as we called it back then), they were shocked to be served one of Mum’s “foreign” dishes such as Kedgeree, Chicken Curry or  Spaghetti Bolognese.  Believe me, they weren’t common in England in the sixties, unless of course you were “foreign”. We came to think of these dishes as normal, but our friends usually pushed the food around their plates and said they weren’t hungry.

A rich fruit cake will keep for weeks in a sealed tin, although you’ll find it disappears quite quickly if you have any fruit cake fans in the house. I’m quite partial myself to a small piece with a cuppa. I thought of Dad as I made this cake. He would have loved it. 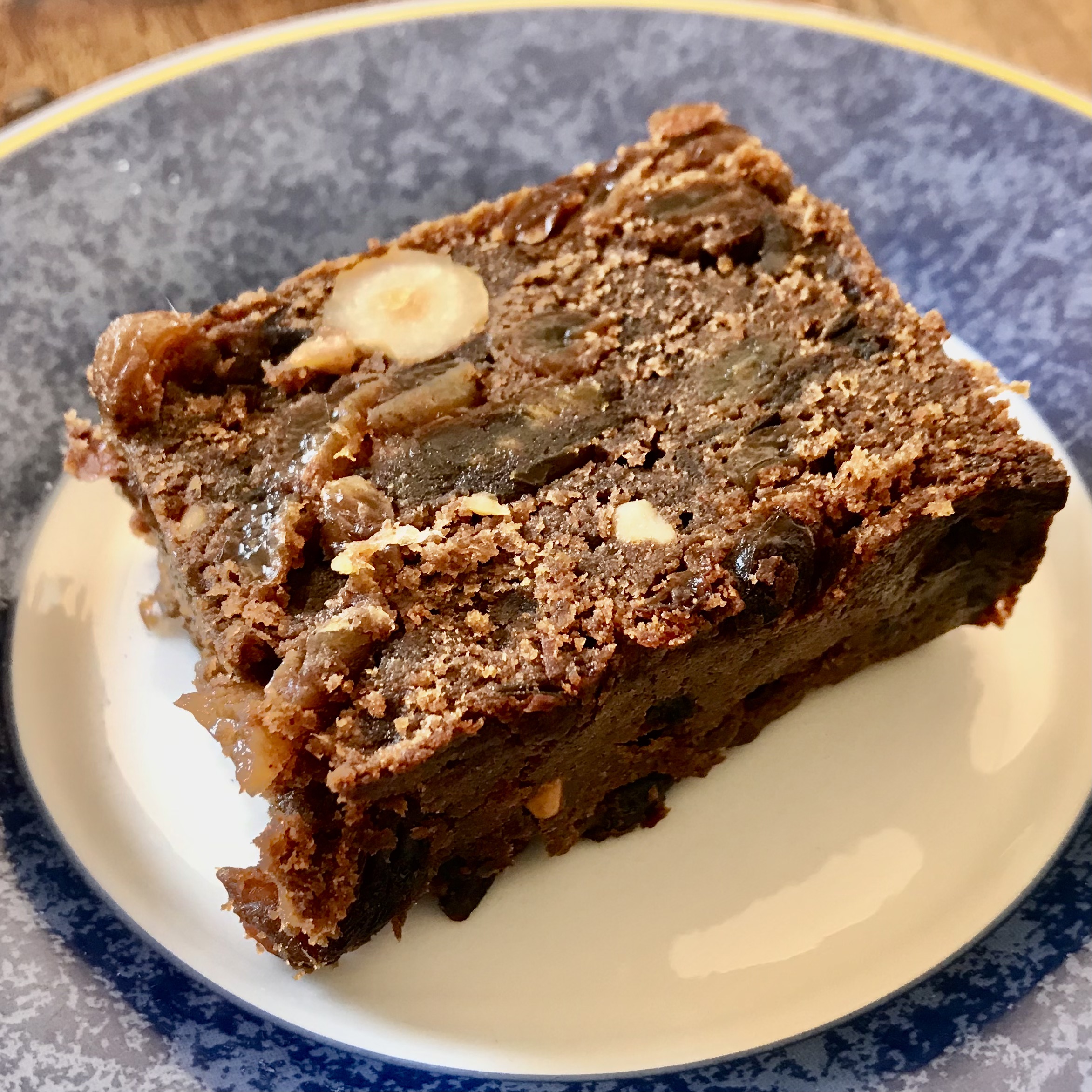 Place the dates and figs in a food processor and process (using the pulse button) until coarsely chopped. Place all the dried fruit in a bowl, mix in the two alcohols (I used brandy and Bailey’s Irish Cream), then cover and leave for a few hours or overnight. Stir a few times.

Preheat oven to 150°C. If you have the option to turn off the fan then do so. Line a 22cm (9 inch) square or round cake pan with baking paper. In a large bowl, with electric beaters, mix the butter, peanut butter and sugar. When smooth add the eggs and lastly the sifted flour, cocoa and spices. Fold in the fruit and nuts by hand, then scrape into the cake pan and smooth the top.

Bake for two and a half to three and a half hours, or until cooked. Ovens vary so test with a skewer which should come out clean when inserted in the middle. Cake should feel firm on top when it’s ready.

Note: If liked, swap some of the dried fruit for dried currants or chopped dried apricots.