This marinade is great for chicken, fish or lamb you are going to cook on the barbecue. It’s also a main ingredient in Tandoori Chicken Salad. The marinade keeps for up to a week in the fridge.

Buy a cooked chicken and the remaining ingredients at the supermarket and you have a quick and easy meal for the warmer weather. Quantities are flexible. 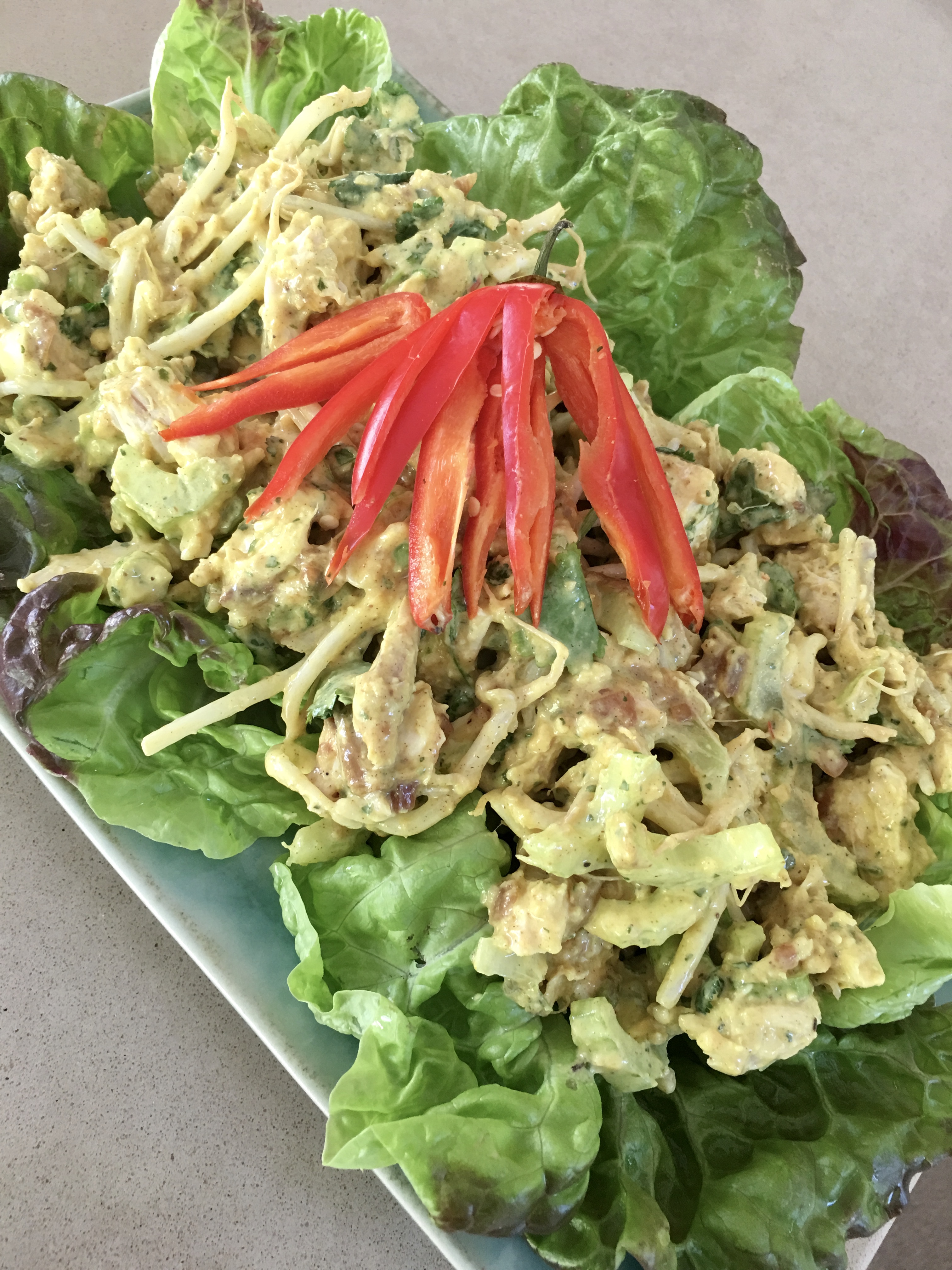 Place all ingredients in food processor and process until smooth. Keeps in the fridge for about a week.

Mix all together, adding more salt if necessary. Use as much marinade as you need to moisten everything. Serve in a mound on lettuce leaves, garnished with red capsicum or chilli.

After all the rich food of the festive season you’re probably ready for some simple but satisfying recipes to please the whole family. This pasta dish hits the spot.

Cook pasta until al dente. Drain then mix in the avocados, the pesto and salt and pepper to taste. Serve topped with parmesan cheese and a drizzle of oil.

Serve with a simple green salad. 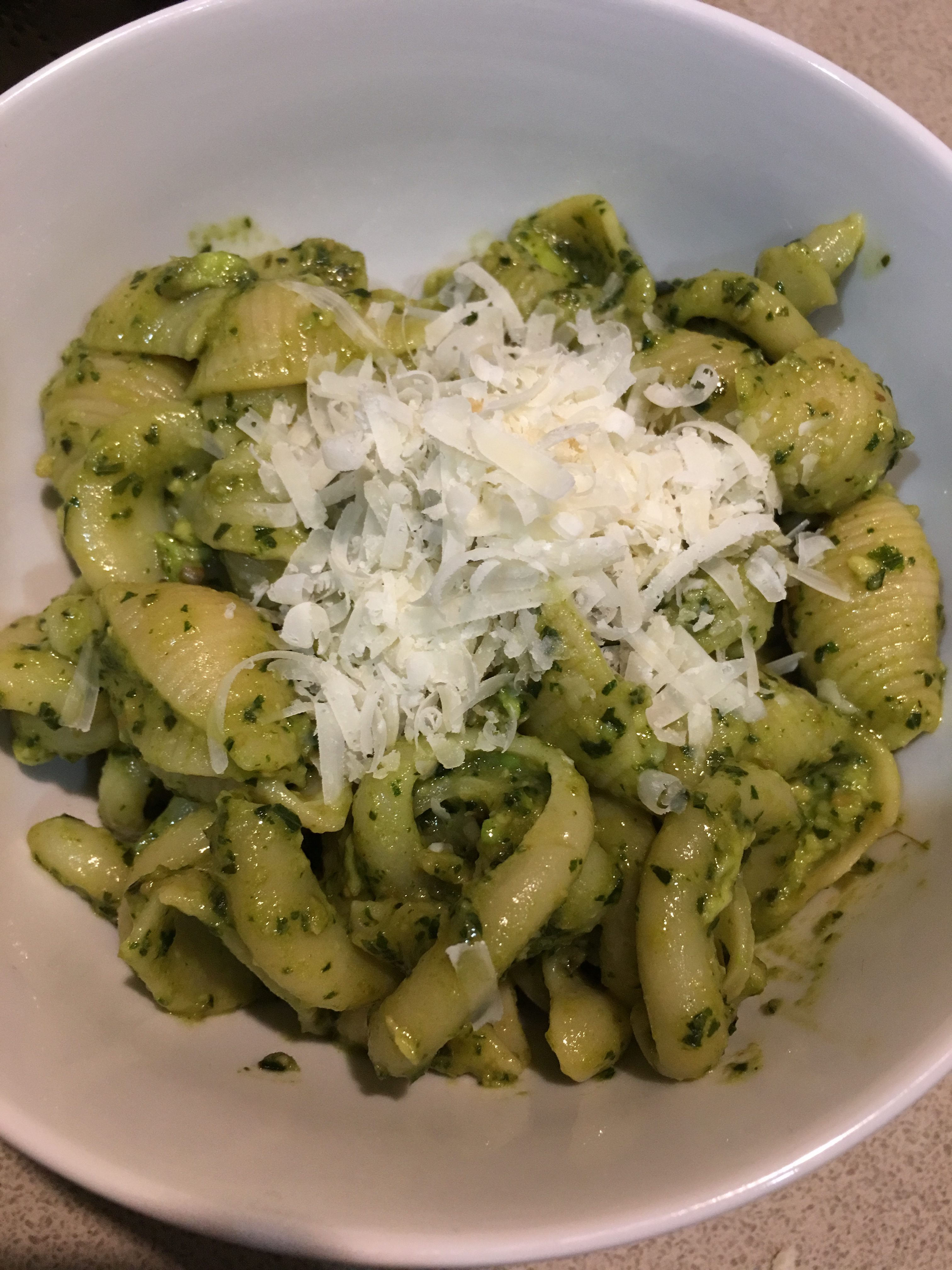 This dessert can be made with fresh or frozen fruit, or a mixture of the two and is popular with all ages. Quantities will depend on the size of your mould. Mine holds 1½ litres and I used raspberries, mangoes, blueberries and kiwi fruit. 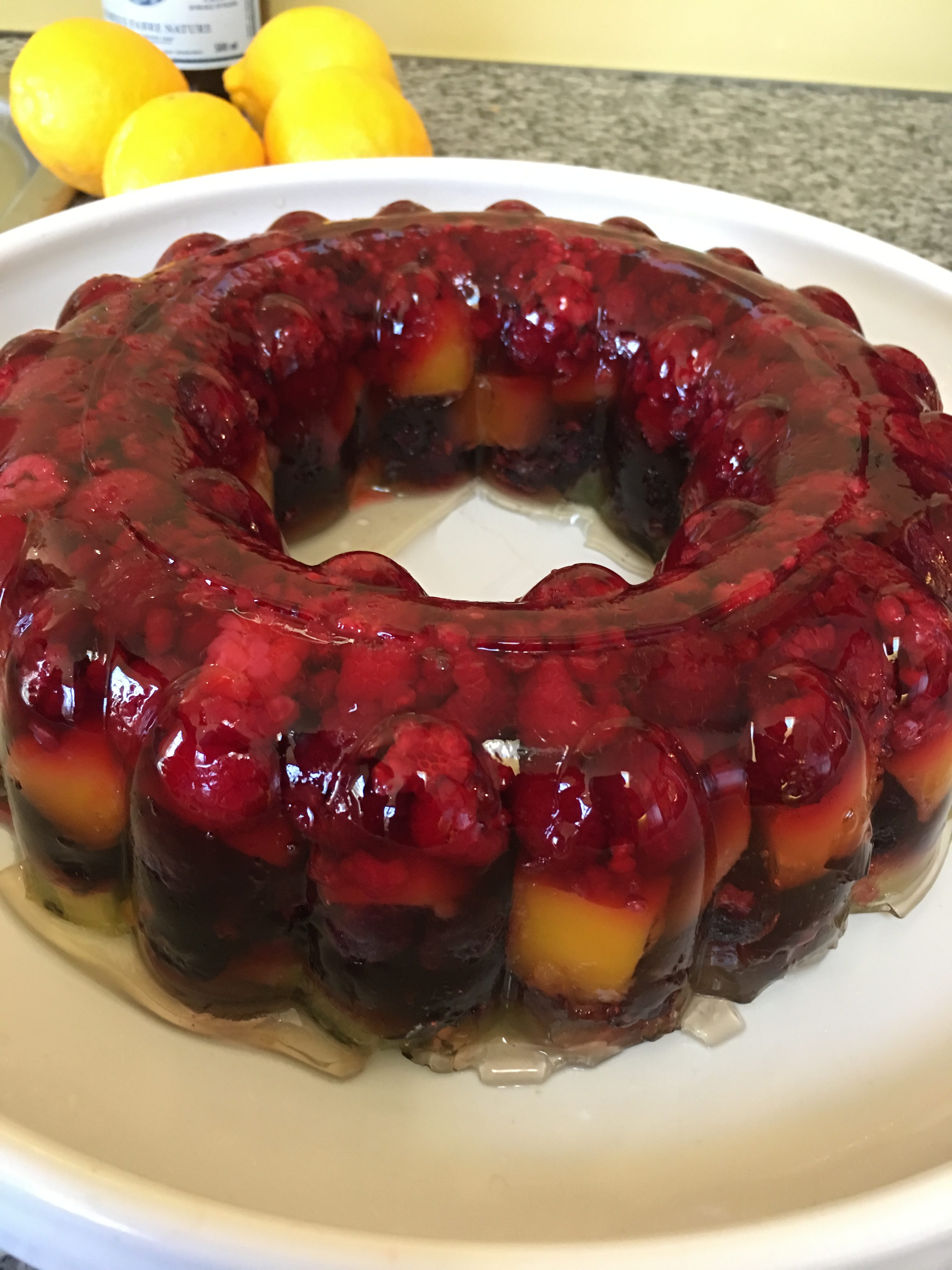 Layer the fruit in the jelly mould, starting with a layer of green fruit, then purple and so on until the mould is completely full of fruit. My jelly mould holds 1½ litres or 6 cups. The jelly will fill in the gaps.

Make up both jelly mixes, using slightly less than the packet says and mixing in the powdered gelatine. My jellies each called for 450 mls of water (half boiling and half cold) which makes a total of 900 mls of liquid. I mixed the two packets with a total of 750 ml boiling water and mixed in the gelatine.

Pour jelly carefully into the mould, filling to the top. Refrigerate overnight. To serve, dip the mould briefly in very hold water then invert onto a large serving platter.

When he was eleven I asked our eldest son James to go into a bakery in a ski resort in France and buy “Deux baguettes s’il vous plaît” while I was double parked outside. I had been round the block twice and there was absolutely nowhere to park.

We sat outside the bakery for what seemed like a very long time with me saying come on you can do it and James saying he really didn’t want to. His more outgoing younger sister wanted him to hand over the money so she could go. But she didn’t need a confidence booster and I wanted him to do it. Eventually James went into the bakery and came out, beaming from ear to ear, one baguette under each arm.

I had completely forgotten this incident until James (now married with kids of his own) reminded me. He says he remembers it whenever he has to do something challenging, like speaking in public.

A couple of weeks ago I decided to use the No Knead Bread recipe to make deux baguettes instead of the usual round loaf you make in a Le Creuset pot. I wasn’t sure if it would work, but decided to give it a go. Well the baguettes were amazing and I’ve made them three times since. Crisp and crunchy on the outside, soft and tender on the inside, the recipe makes two small baguettes or one very large one, which probably wouldn’t fit in my oven. 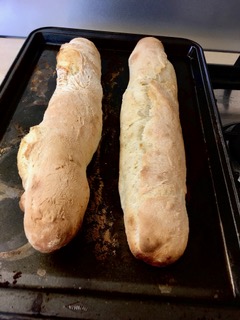 Place all ingredients in a large bowl and mix thoroughly with the blade of a knife. Cover bowl with plastic wrap or a tea towel and leave for a few hours. The amount of time you can leave it is flexible and varies a bit according to the weather. In the middle of summer it will be ready to go to the next stage in about three hours, but it’s okay if you leave it longer. When ready the dough will have doubled in size.

Sprinkle extra flour on work surface and scrape out the dough. Using a little extra flour as necessary, form dough into a non-sticky round, then cut in two and form each into a sausage shape about 30cm or 12″ long. Place side by side on a lightly greased oven tray, sprinkle with sesame seeds if liked, then leave aside while the oven heats up.

Heat the oven to 220°C. Bake bread for 15-20 minutes or until golden brown and crisp all over. Cool on a cake rack. Bread freezes well.

With just a week left until Christmas here are some suggestions for sweet dishes to prepare ahead or make on the day. There are a few more options including savoury dishes for Christmas and New Year entertaining here.

I would like to take this opportunity to wish all my readers a happy holiday season and a healthy, happy and successful New Year. 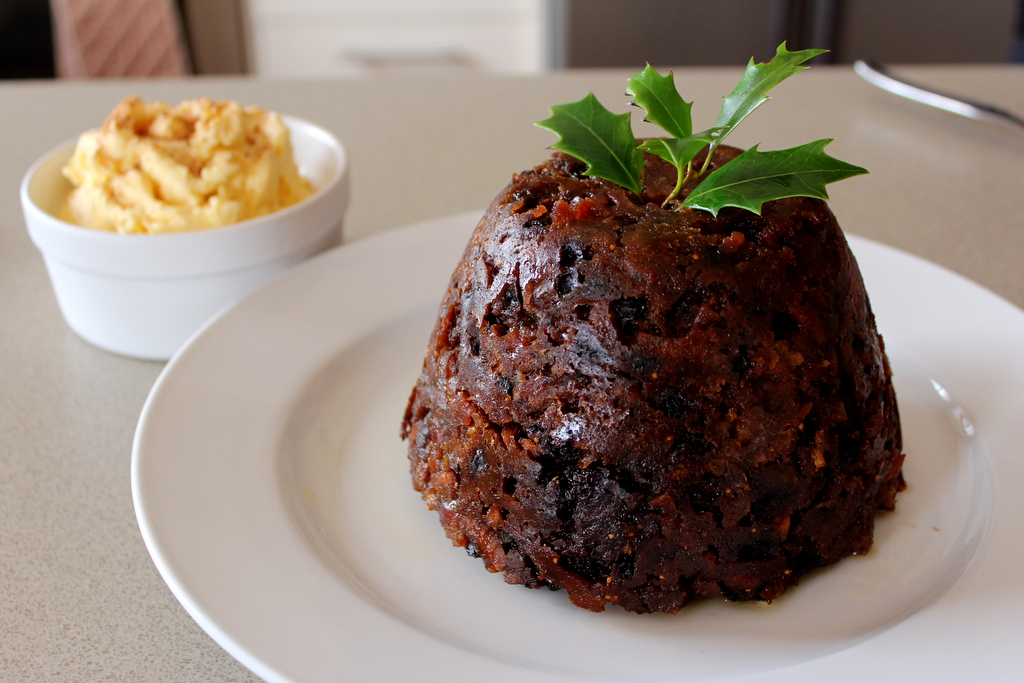 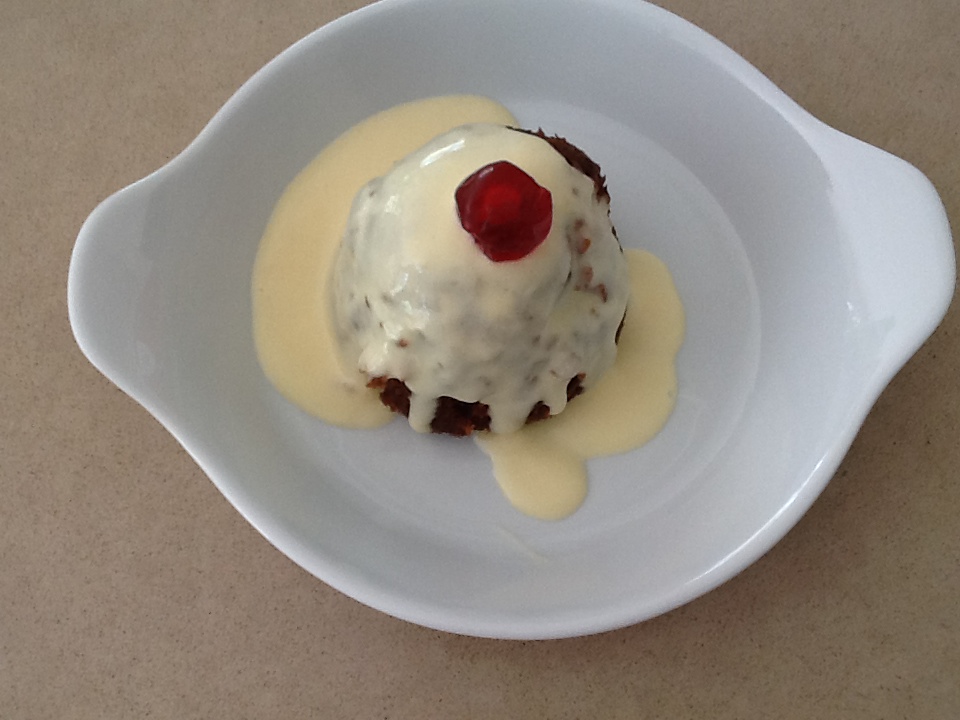 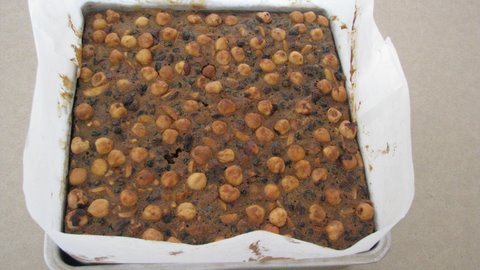 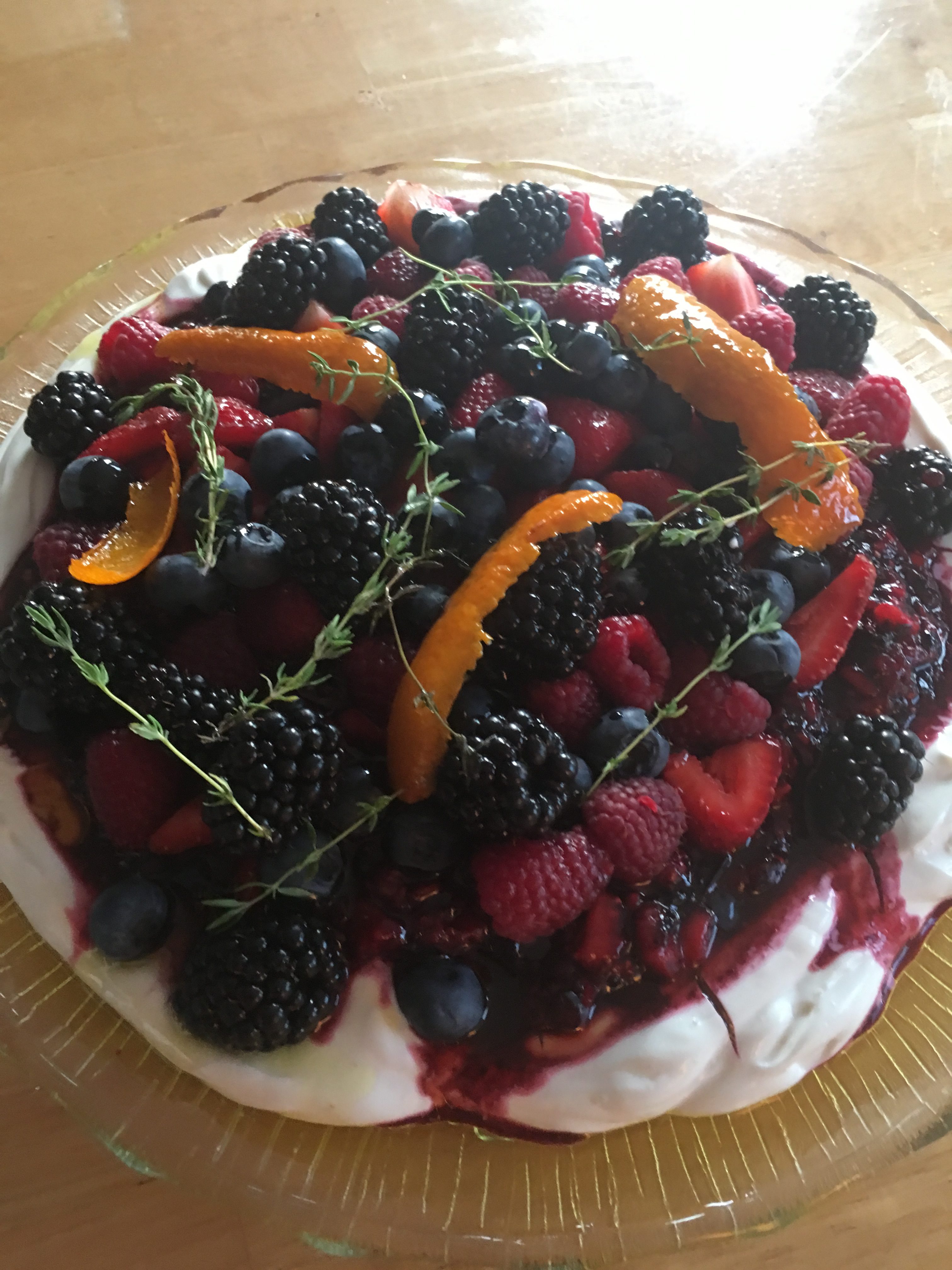 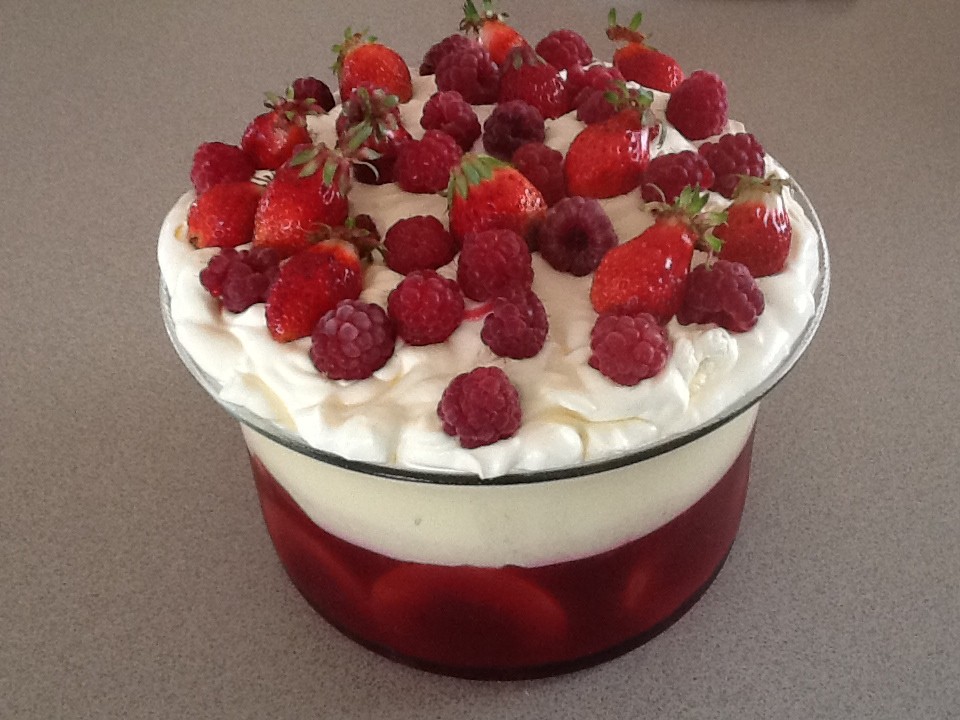 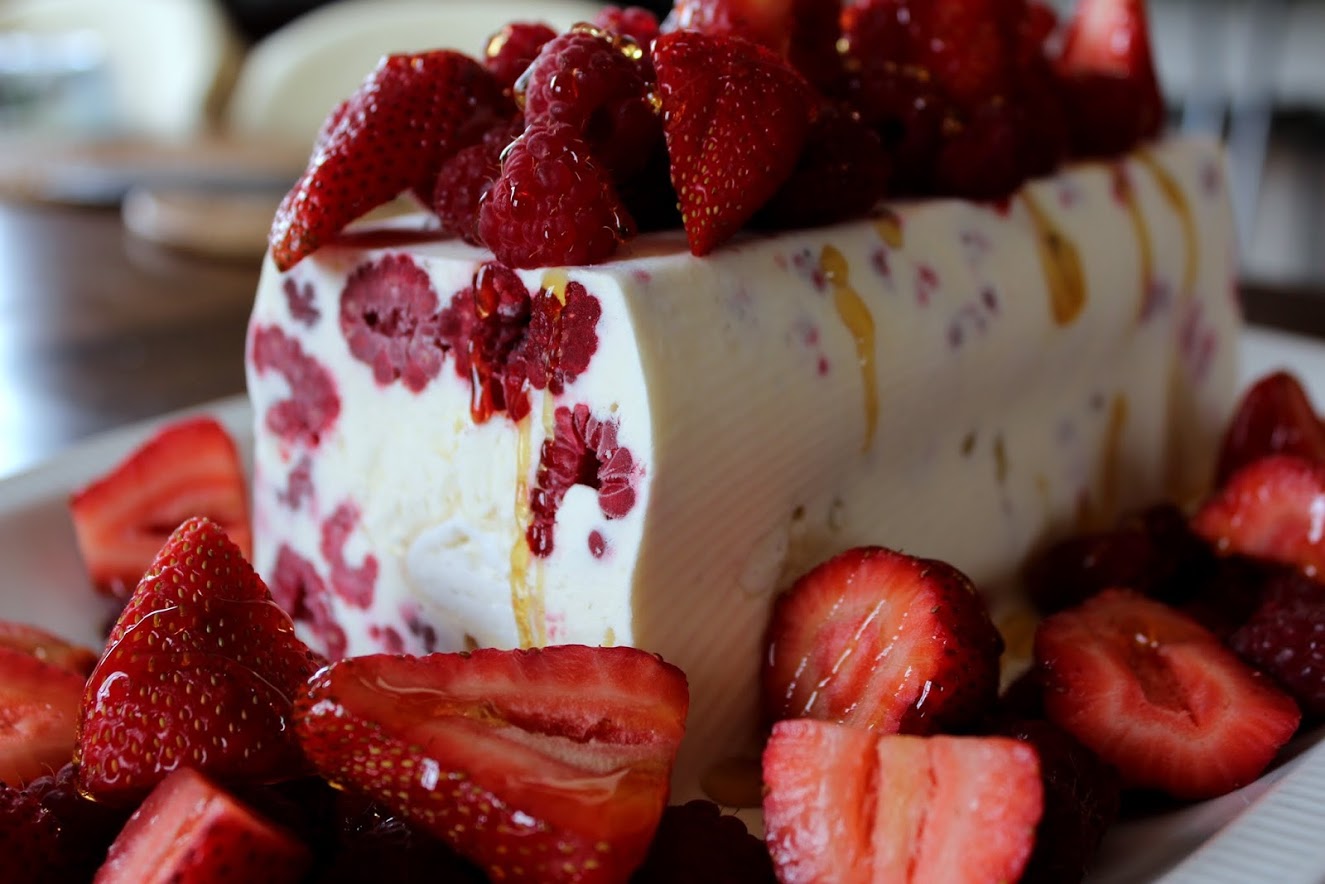 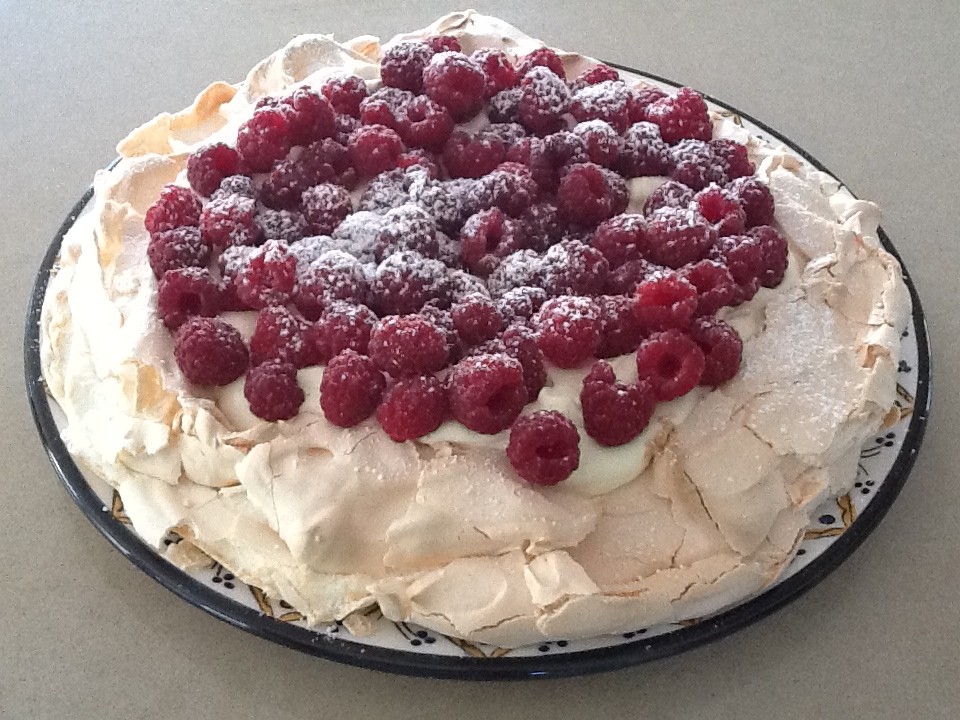 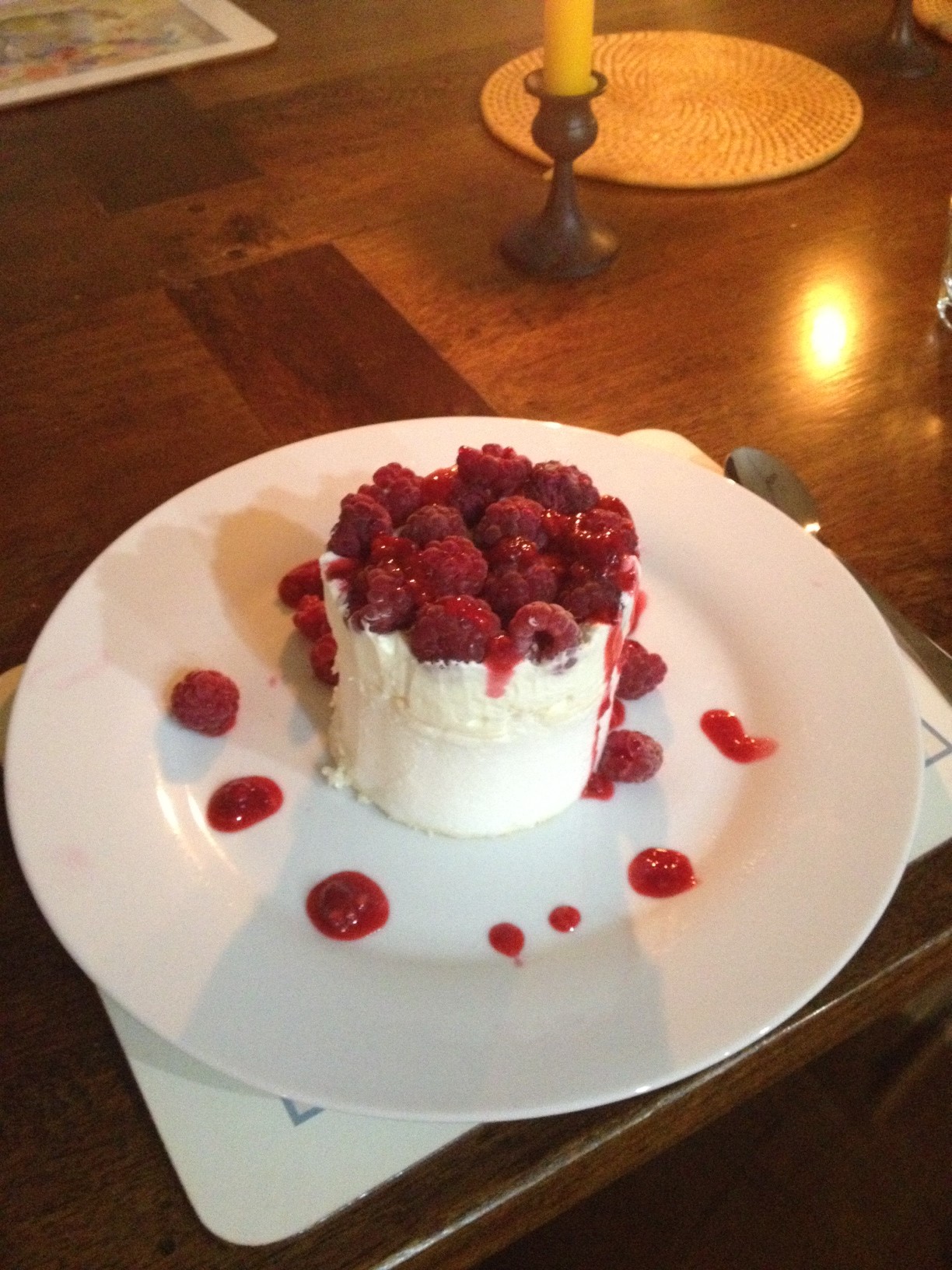 I made this delicious Ottolenghi dessert when we were in Vancouver for my brother’s wedding in August, when the Canadian berry season was in full swing. Friends who saw the photo on Facebook thought it was a pavlova. In fact the base is strained yoghurt, known as labneh in the Middle East. Much healthier.

For subscribers in the southern hemisphere this could become your go-to dessert for the holiday season. For those living in the north, you’ll have to wait until summer or perhaps try using frozen berries. Ottolenghi doesn’t use the orange juice in this recipe, but I’ve made the recipe twice, once with and once without the juice. Much more orangey with.

The day before serving make the labneh and the orange oil. Place a sieve over a bowl and line it with muslin or similar fabric. I use a man’s handkerchief which I keep especially for this purpose. Scrape yoghurt into the sieve, cover and refrigerate overnight. Next day discard the liquid – my dog loves it. Mix icing sugar and vanilla into the yoghurt.

Remove the peel from the orange with a vegetable peeler, then remove the juice and heat it in a saucepan for a few minutes, or until reduced by half. Add the olive oil, the thyme and leave to infuse overnight.

At serving time spread labneh onto a large serving platter. Place about half the berries in a food processor with the caster sugar and pulse a few times to chop roughly. Spoon on top of the labneh. Top with the remaining whole berries, slicing the strawberries if large. Drizzle with some of the orange oil and garnish with the orange zest and some fresh thyme sprigs – the original ones will have gone a bit brown.

Variations: use other fruit combinations, such as bananas and passionfruit; kiwi fruit and strawberries

A  simple combination of flavours turns a shop bought packet of gnocchi into something delicious. This recipe was in a free magazine I picked up in Coles supermarket. 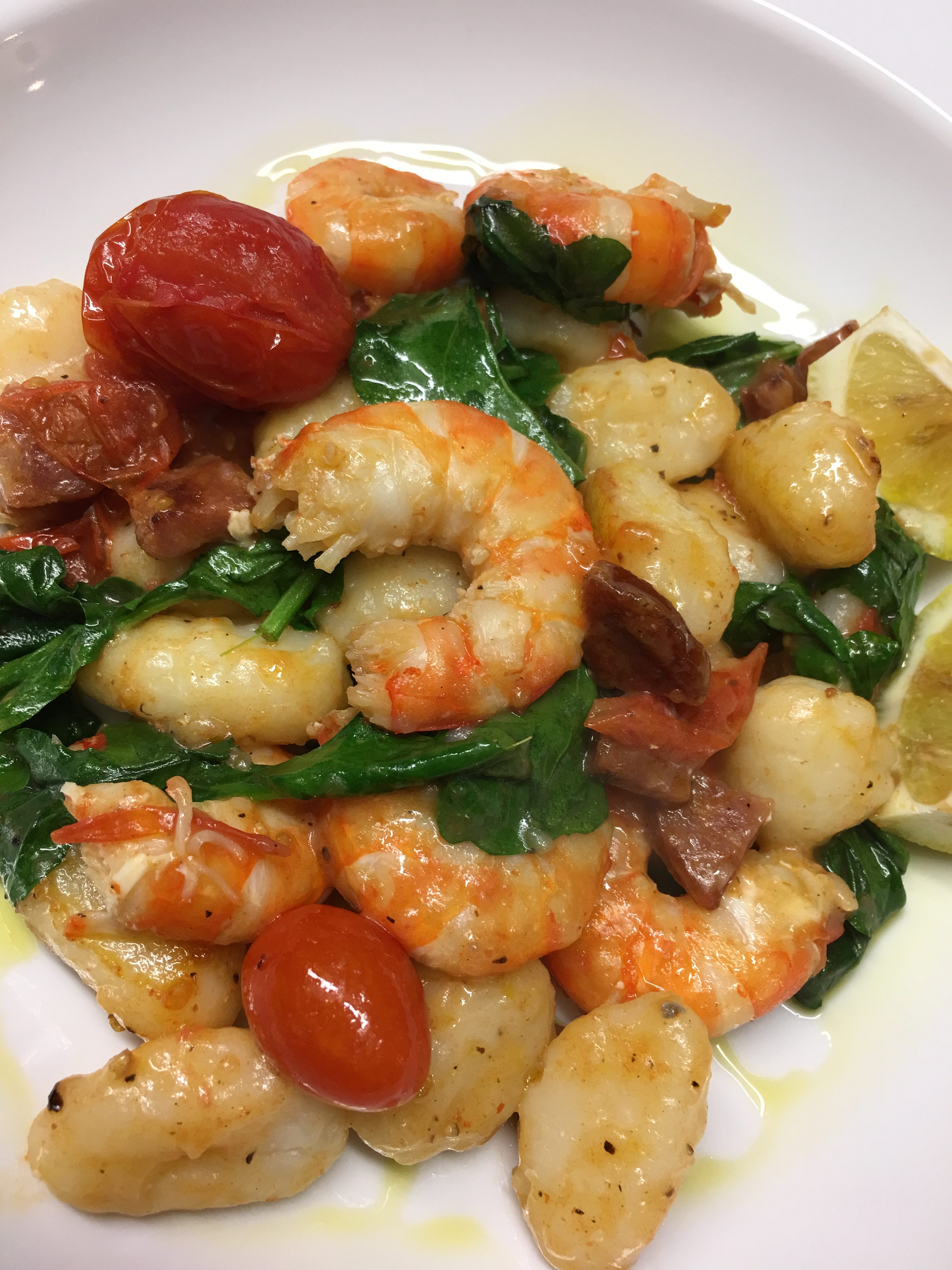 In a large non-stick frying pan or wok heat the oil over medium heat. Add the chorizo and cook, stirring for 1-2 minutes, If using raw prawns add them now and cook, tossing, for a further 4-5 mins, or until they change colour.

Meanwhile cook gnocchi in boiling water according to packet directions, then drain. Add to the frying pan. If using cooked prawns add them now with the gnocchi and the tomatoes and stir fry for 1-2 minutes. Add the rocket or spinach, toss well and season to taste. If you like a bit of heat, add some chilli sauce.

Who doesn’t like doughnuts? The only trouble is you have to cook them in deep hot oil, which puts a lot of people off making them at home.

This recipe combines the flavours of a doughnut in a muffin which is baked in the oven. Quicker and easier than anything deep fried, but they are brushed with melted butter, to help the sugar stick, so I’m not sure about them being healthier! A perfect treat for the kids when they come home from school. 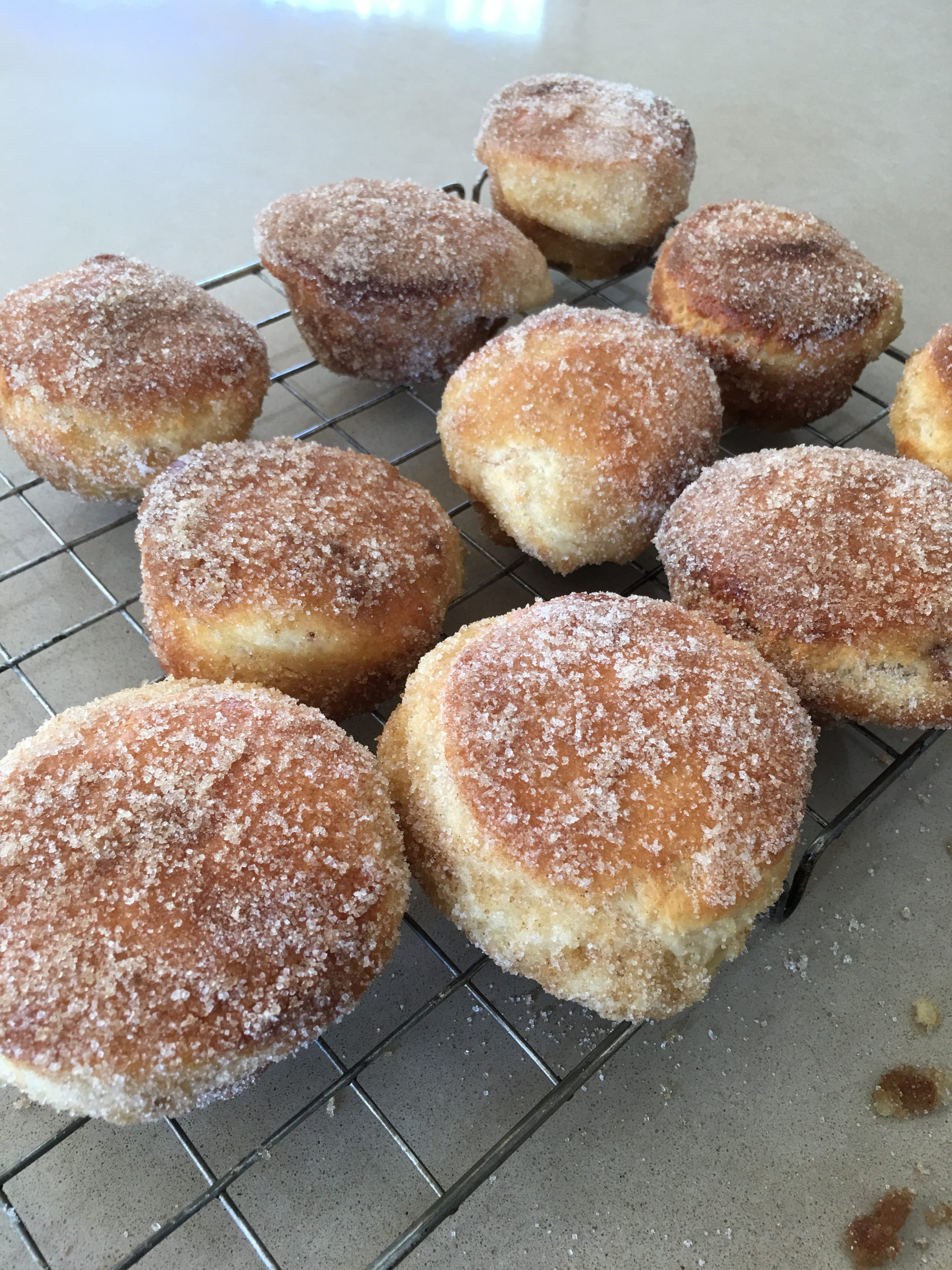 Preheat oven to 180°C. Grease a 12 hole muffin pan with one third cup capacity holes. Place flour, sugar, salt, oil, egg, buttermilk and vanilla in food processor and whiz to combine, stopping to scrape down the sides, or use electric beaters. Fill each muffin hole a bit over half full. Place a heaped teaspoon of jam in the middle of each, then divide remaining mixture between the muffins. I made 10 but they could have been a bit smaller to end up with 12.

Bake for 20 mins or until well-risen and golden brown. Cool in the pans for a few minutes, then remove. Mix sugar and cinnamon. While still warm brush each muffin all over with melted butter then roll in the sugar. Best eaten on the day they are made.

Variations: use lemon curd, chocolate chips or Nutella in the middle instead of red jam.

Den Bosch is one of the oldest cities in the Netherlands. We spent a couple of days there recently and one night had tapas for dinner at a wine bar.

The food was very good and the waitress was kind enough to give me the recipe for the dessert. I have a cheesecake recipe which is very similar to this, but the addition of a little vinegar really makes a difference. The method is also slightly different. 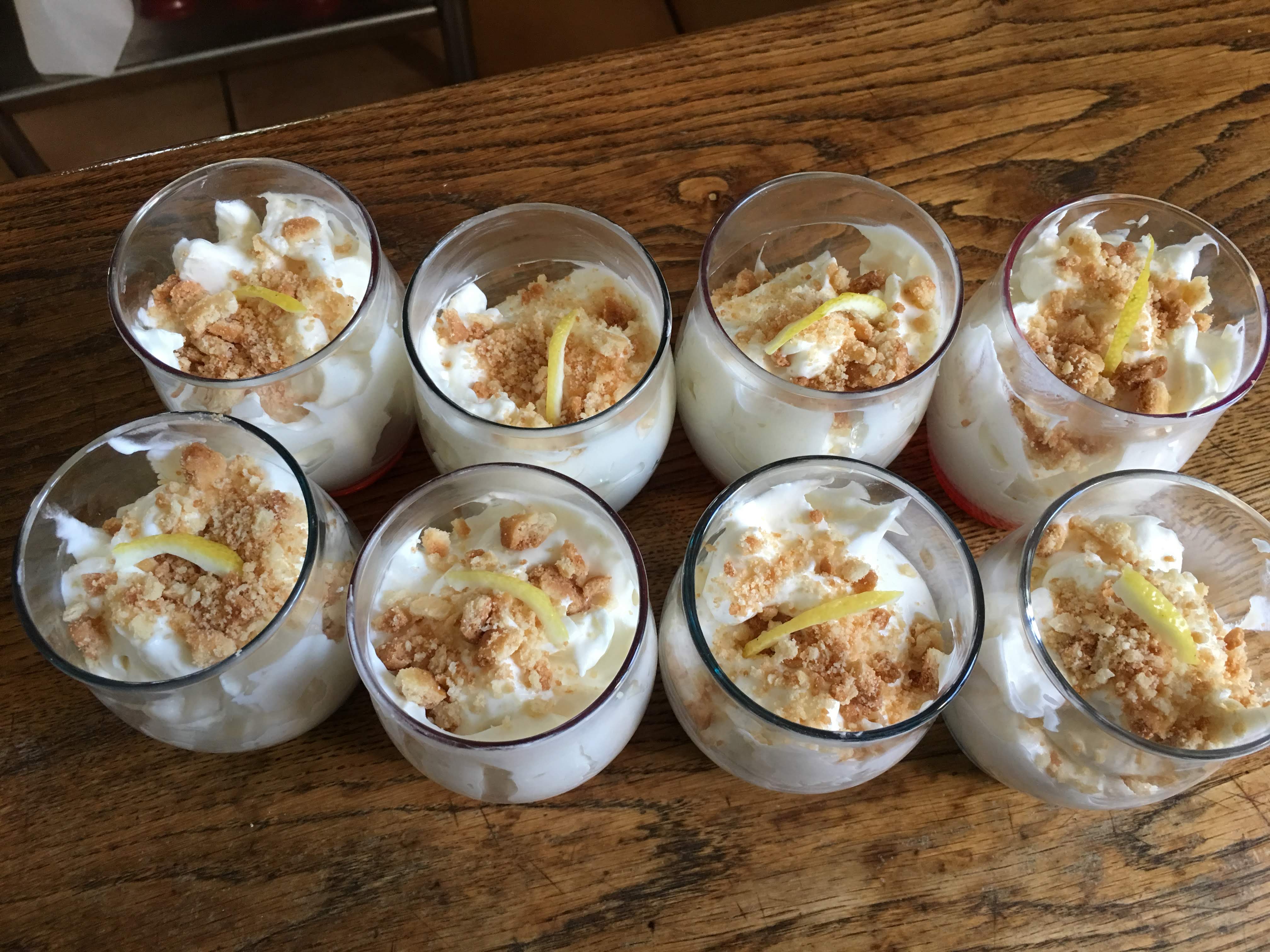 Whip cream with electric beaters until thick then continue whipping while you add the condensed milk, lemon rind and juice and vinegar. I used a Kenwood standing mixer, but you can use hand held beaters.

Variation: Fold through the pulp of 3-4 passionfruit before spooning into glasses.

Leftovers on a slice of buttered toast is one of my favourite quick meals. What might not be quite enough for one or two can be stretched (as my mother used to say) by serving it on a slice of toast. Leftover spag bol sauce for example.

This recipe uses a slice of toast to create a light but satisfying mid-week dinner or weekend lunch for two. Use two small chicken breasts, one large one, or buy the small strips called fillets. 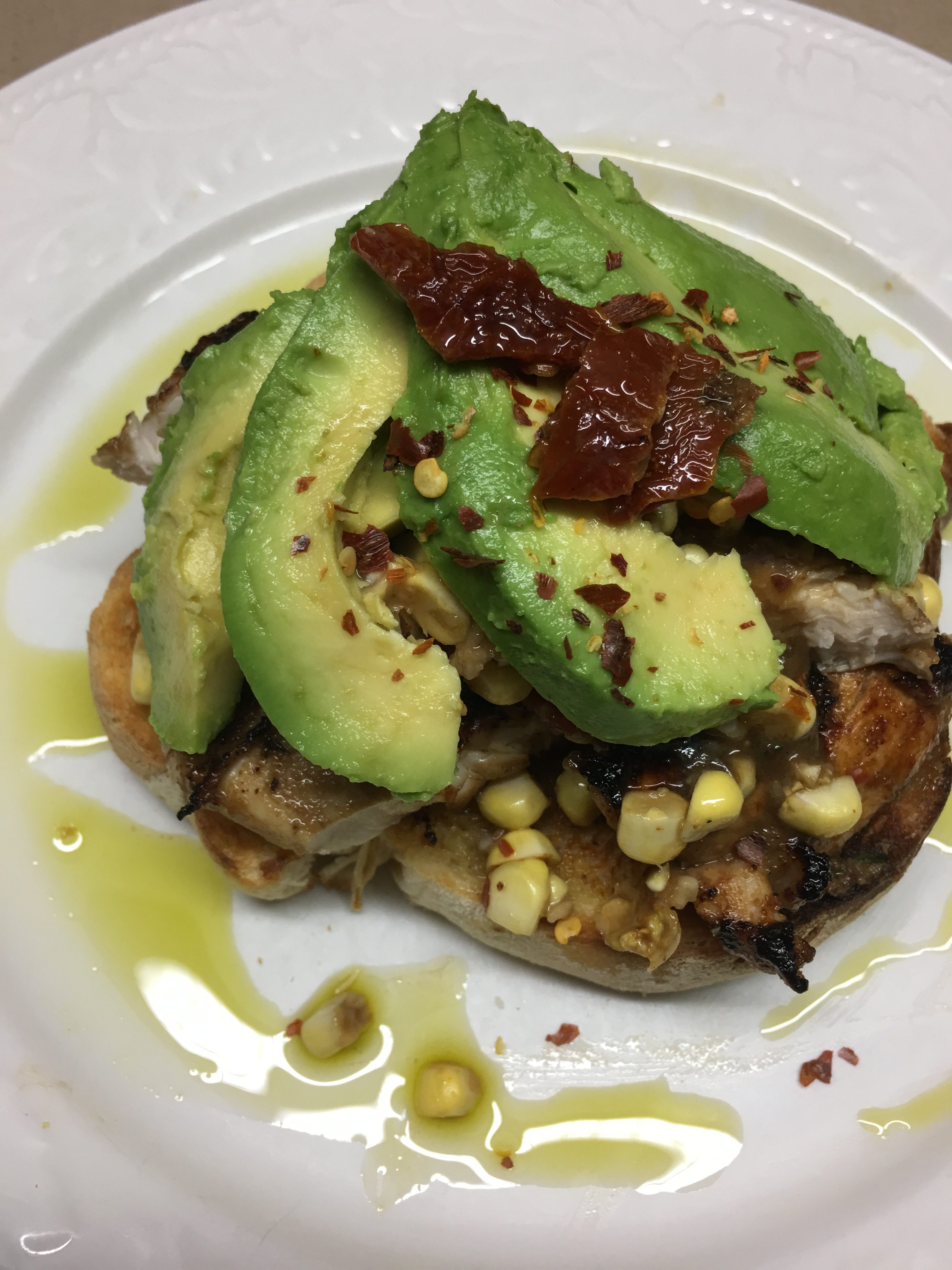 If using whole chicken breasts cut them into chunky slices like fillets.

Mix all ingredients for marinade with the chicken in one bowl. Remove kernels from corn cob by slicing downwards with a sharp knife. Mix with remaining salsa ingredients in another bowl.

Heat olive oil in a non-stick frying pan and fry chicken for 4-5 mins each side or until golden brown and cooked through. Serve chicken on toast, topped with the salsa and avocado. Garnish with something red for a bit of colour and a sprig of thyme. If liked drizzle a little olive oil around the plate.